Enter The Black Windows; 14 learners who took on the world of sound design, and showed everyone around them their fantastic new approaches to story writing.

Back in January 2017 we began one of our many exciting ACW Lead Creative Schools Scheme projects. This particular project took place at the wonderful Maesycwmmer Primary School. Here, pyka worked alongside the staff to tackle some major development priorities: literacy, oracy, and confidence.

Enter 14 learners, who would collectively come to be known as The Black Windows. They joined us with a diverse range of interests and skills, but were primarily brought forward for this project by their teachers due to their introverted tendencies in the classroom. It was time to bring them out of their comfort zones, and to do that, we were to set out and explore the deepest depths of the mysterious world of sound design.

Why sound design? Well to us it instantly felt like the perfect creative discipline which could potentially unify all of the development priorities:

Firstly, in our experience, sound art is a fantastic breeding ground for high quality outputs, often achieved through unusual and downright 'weird' processes; a circumstance which is perfect for confidence building. However it can all be achieved in a low risk fashion. With there being no 'right or wrong' involved in the creative process, the learners would be alleviated of a tremendous pressure synonymous with traditional musical performance; perfect for preventing confidence damage. Secondly, and most importantly, sound is a fantastic yet often underestimated medium when it comes to influencing mental imagery, and with this lay the potential to unlock an array of exciting methods that would transform the way these learners could write and present stories.

"I've never written stories in this way before. I mean, I've never thought about sound in a way that could help me create places and make things happen." Logan L. Maesycwmmer Primary School. 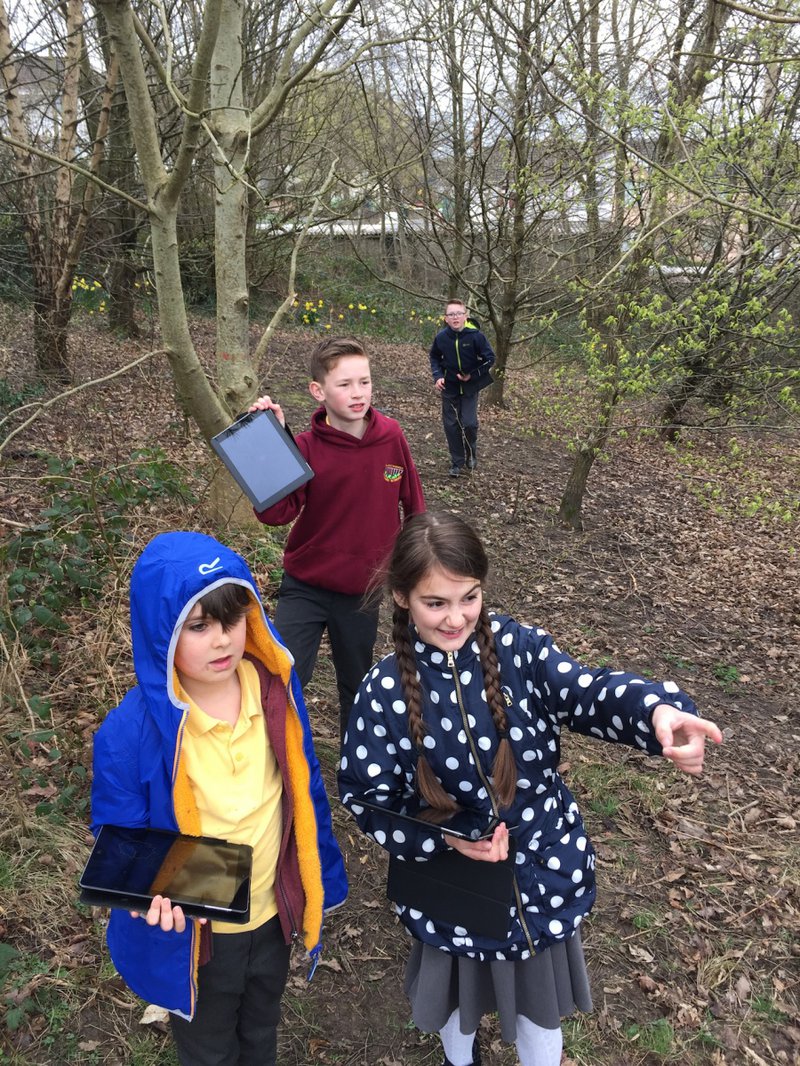 We kicked the project off with a masterclass in our very own sound app pyka_loop for iOS. Once the learners had a better understanding on the processes of digital sound recording, audio manipulation, and content auditing, the hunt to develop a detailed sound library began. Inside the classrooms. Outside the school. Different objects. Different textures. They formed a comprehensive foley library which would become the building blocks for their audio stories. The final sound hunting session took place after sundown, with a lock-in at the school. This gave the learners a greater sense of ownership and independence through uninhibited access to their school. 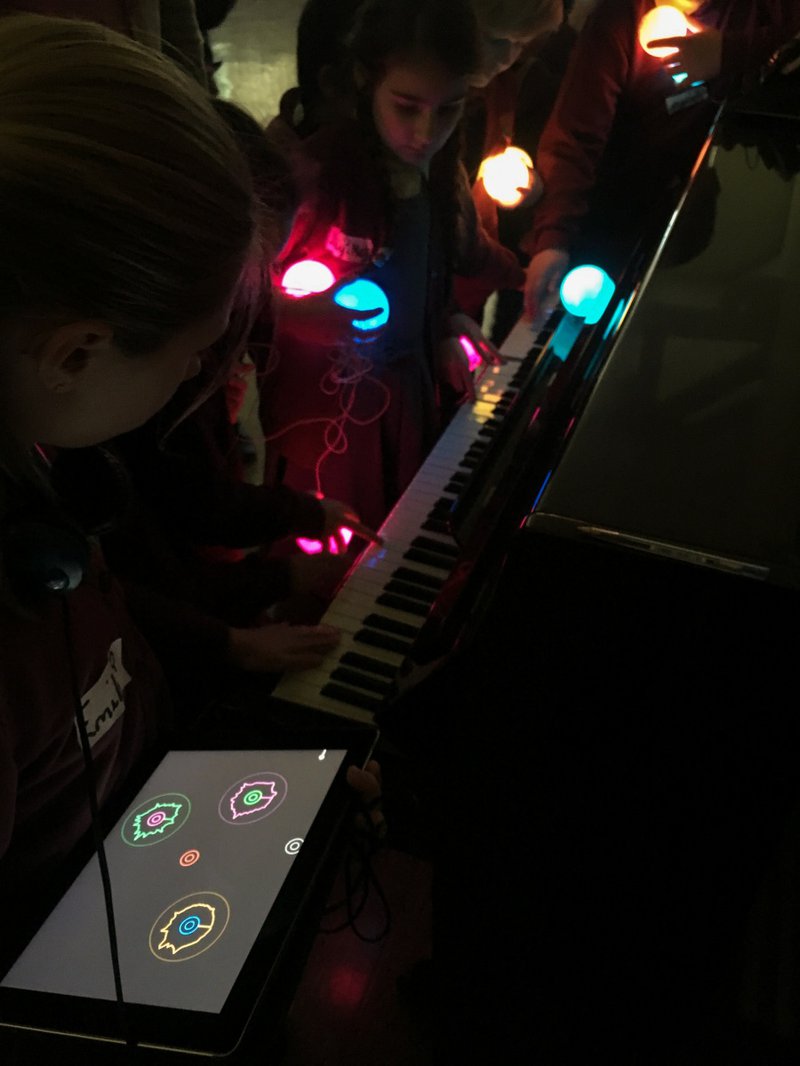 At this point The Black Windows had created an extensive sound library categorised with creative descriptive language, and were ready to start creating their stories. However, we wouldn't begin with the standard writing process they were familiar with in school. To create their story they would firstly sculpt their worlds using only sound. Once they created their soundworlds, they would then listen to them and allow their compositions to influence the story in their minds.

"Where are you hearing? What is happening? What can you smell? What colour is that sound?"

Only after going through this mindful artistic process would they finally put pen to paper and use written word to bring these soundworlds to life.

James and Dylan, two members of The Black Windows, collaborated on the creation of their soundworld:

...which led to two incredible short stories, both fantastic interpretations of the twirly spiralling audio design they created in their soundworld composition: 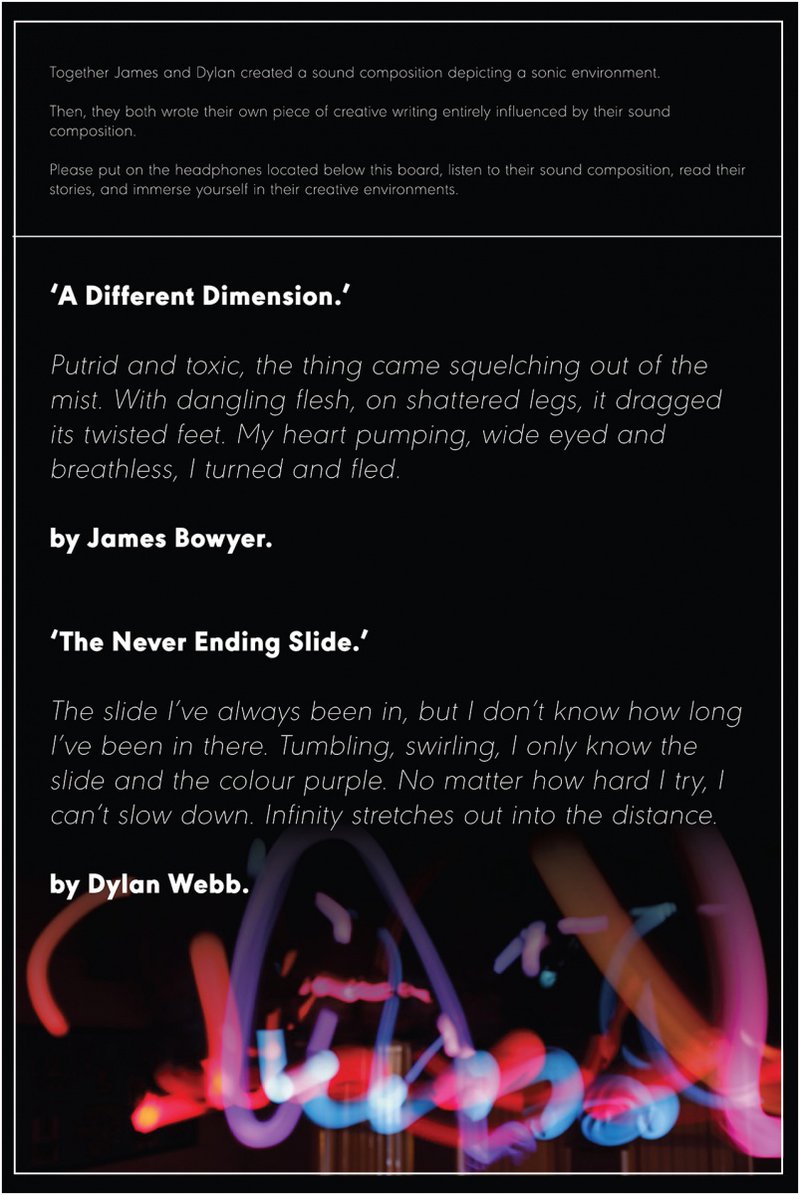 Once all 7 soundworlds and all 14 stories were completed, the project culminated in a showcase event, designed by The Black Windows themselves.

The event was made up of two parts. Firstly, an exhibition room showcasing the soundworlds and the written stories created by the learners. Here visitors were able to fully immerse themselves in their work, listening to the audio and soundtracking their reading experiences.

Secondly, an interactive sound performance space for the visitors to get a chance to create their very own soundworld alongside members of The Black Windows. Complete with 360 degree sound systems and a quad array of iPads, visitors were able to record sounds from the learners' audio stories. This evolving communal performance resulted in a unifying soundworld which championed all of the learners' sounds and pumped sonic life throughout the school. 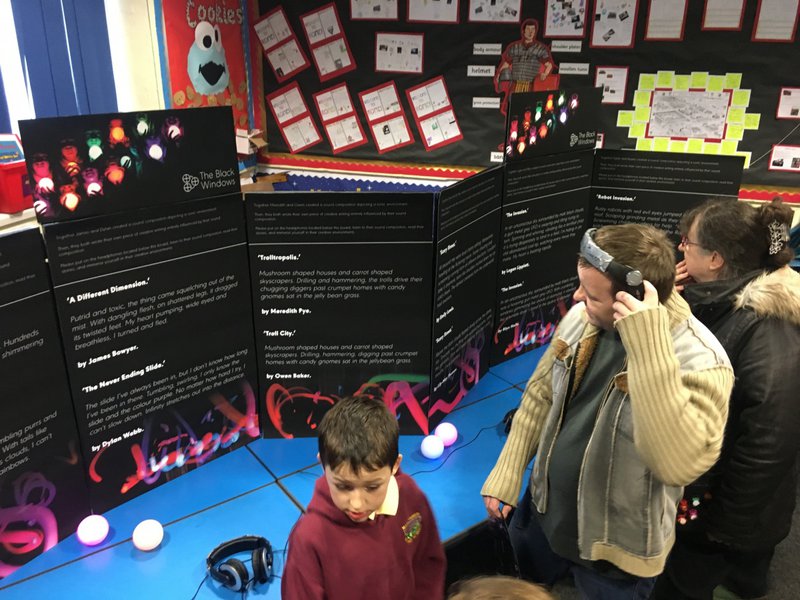 Wonderful remarks were made by all those who attended, with parents observing 'significant differences' in their child's confidence in and out of school.

"I thought the idea of allowing the pupils to co-construct a project to develop their creative writing skills and improve their confidence levels was extremely powerful. I was shown around the exhibition by the pupils themselves who were very proud of their work and talked me through their experience working on this interactive sound project." Mirain Evans. Creative Learning Assistant, Wales Millenium Centre.

The discoveries we've made in collaboration with Maesycwmmer Primary School have been invaluable to our core development as a company and we're hoping to continue to push our explorations further in supporting literacy through creative means. For now, we would like to leave teachers and fellow artist-educators with this open question:

Other than sound, what other activities and/or sensory stimulus could be utilised in schools to reinvigorate approaches to creative writing?

Stay tuned for the next LCS Reflections article coming soon.